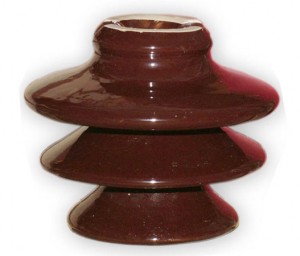 Pin insulator are almost always deployed in the open air, so isolation when wet is a major consideration. To combat this problem, pin insulators feature extra skirts or wide shells to increase the surface distance between the conductor and the pin.

The “pin” is typically a wooden or metal dowel of about 3 cm diameter with screw threads. The pin insulator has threads so that it can be screwed onto the pin. A typical pin insulator is more than 10 cm in diameter and weighs one kg or more. Size depends on the voltage to be isolated and the weight of span of wire to be supported.