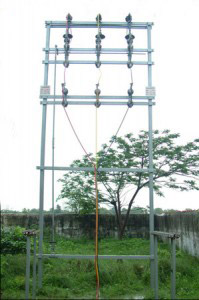 An Overhead power line is an electric power transmission line suspended by towers or utility poles. Since most of the insulation is provided by air, overhead power lines are generally the lowest-cost method of transmission for large quantities of electric energy. Towers for support of the lines are made of wood (as-grown or laminated), steel (either lattice structures or tubular poles), concrete, aluminum, and occasionally reinforced plastics. The bare wire conductors on the line are generally made of aluminum (either plain or reinforced with steel, or sometimes composite materials), though some copper wires are used in medium-voltage distribution and low-voltage connections to customer premises. A major goal of overhead power line design is to maintain adequate clearance between energized conductors and the ground so as to prevent dangerous contact with the line. Today overhead lines are routinely operated at voltages exceeding 765,000 volts between conductors, with even higher voltages possible in some cases.

The first transmission of electrical impulses over an extended distance was demonstrated on July 14, 1729 by the physicist Stephen Gray, in order to show that one can transfer electricity by that method. The demonstration used damp hemp cords suspended by silk threads (the low resistance of metallic conductors not being appreciated at the time).

However the first practical use of overhead lines was in the context of telegraphy. By 1837 experimental commercial telegraph systems ran as far as 20 km (13 miles).  Electric power transmission was accomplished in 1882 with the first high voltage transmission between Munich and Miesbach. 1891 saw the construction of the first three-phase alternating current overhead line on the occasion of the International Electricity Exhibition in Frankfurt, between Lauffen and Frankfurt.

In Germany in 1957 the first 380 kV overhead power line was commissioned (between the transformer station and Rommerskirchen). In the same year the overhead line traversing of the Strait of Messina went into service in Italy, whose pylons served the Elbe crossing 1. This was used as the model for the building of the Elbe crossing 2 in the second half of the 1970s which saw the construction of the highest overhead line pylons of the world. Starting from 1967 in Russia, and also in the USA and Canada, overhead lines for voltage of 765 kV were built. In 1982 overhead power lines were built in Russia between Elektrostal and the power station at Ekibastusz, this was a three-phase alternating current line at 1150 kV (Powerline Ekibastuz-Kokshetau). In 1999, in Japan the first powerline designed for 1000 kV with 2 circuits were built, the Kita-Iwaki Powerline. In 2003 the building of the highest overhead line commenced in China, the Yangtze River Crossing.