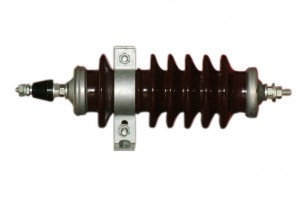 According to most definitions, a Lightning Arrester is a Device Used on Power Systems above 1000V to Protect other Equipment from Lightning and Switching Surges.

Ok, how does it divert lightning?

To Power System conductor. At the Heart of All Arresters is the Metal Oxide Varistor (MOV). The MOV Disk is a Semiconductor that is sensitive to Voltage. At normal Voltages the MOV disk is an insulator and will not conduct current. But at higher voltages caused by lightning it becomes a conductor.

A lightning Arrester is essentially a collection of billions of microscopic junctions of Metal Oxide Grains that turn on and off in microseconds to form a current path from the top terminal to the ground terminal of the arrester.

So there you have it. A Lightning Arrester is a device, used on power systems, that contains billions of electronic switches that divert lightning around sensitive equipment and saves them from damage.

where can i get one ?